Features of the Park 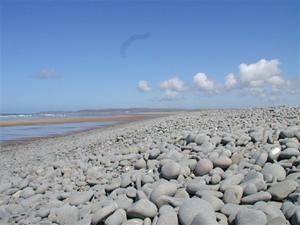 The habitats consist of sand dunes, salt marsh and unimproved  grassland with a large area of great sea rushes which to a certain extent mimics a woodland or hedgerow environment.

The Northam Burrows is a Site of Special Scientific Interest and qualifies on three counts. Firstly  and most spectacularly is the Pebble Ridge, secondly  the Great Sea Rushes (juncus acutus) and thirdly for the Water Germander (teucruium scordium) found only here and at Braunton Burrows on the Eastern shore of the estuary.

The  Burrows is Common land and still actively grazed by the 'Potwallopers' of the ancient manor of Northam .  The rights of common are to graze 1200 sheep and 100 horses  plus the right to "air and exercise" which is taken as the right of pedestrian access.  In the summer months and holiday season there is a toll charge for the passage of vehicles onto the common.

Because it is common land the Burrows has not been subjected to the normal  development and  intensive use of other similar seaside dune systems.  This gives a greater range to the diversity of the plants and animals that inhabit the Burrows. The site is particularly noted for its bird life on the pasture and particularly wading birds visiting from the saltmarsh and estuary on the high or spring tides.

The Burrows Centre can be found adjacent to Sandymere. Redeveloped in 2021 there is a museum, cafe, toilet facilities, a small souvenir shop and Ranger services. School and other party bookings are taken throughout the year.