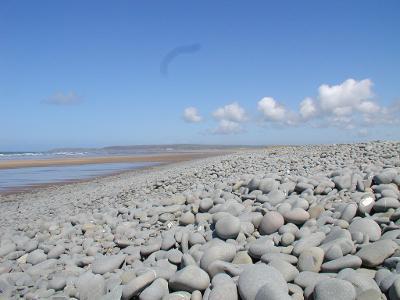 The pebble ridge is an iconic coastal feature made by natural processes.

It comprises a shingle bank, which stretches along the front of Northam Burrows Country Park. Where it meets the estuary the pebble ridge forms a coastal spit, curving back on itself to create a sheltered bay at the Skern on the east side of park.

Unlike other shingle banks, such as Chesil Beach, the pebble ridge is made up of large cobbles or 'pebbles' making it a unique geological formation and is one of the main reasons that Northam Burrows has been designated a Site of Special Scientific Interest.

The pebbles provide a clue to how the ridge has been created. They are made of fine grain sandstone, which is also found in the cliffs between Westward Ho! and Hartland Point. These cliffs are prone to collapsing into the sea, where the action of the waves wears rough edges and polishes the rocks to create hard grey pebbles.

These pebbles are then transported along the coastline by a process known as long shore drift. Prevailing winds drive strong currents that have the effect of a giant conveyor belt and have moved the pebbles from the cliffs to their current location in front of Northam Burrows.

Accounts of a possible tsunami in the 17th century have led some to believe a major landslide at the cliffs west of Westward Ho! triggered the development of the ridge. This theory remains unproven and the exact date the pebble ridge came into existence is uncertain.

As a natural coastal defence the pebble ridge is managed to provide protection for residential properties and to ensure the old landfill site at the estuary end of Northam Burrows is not exposed. The long term strategy for management of the pebble ridge is set out in the Shoreline Management Plan (volume 2), which can be accessed by following the link below:

Subsequent supporting studies are available in the 'Related Downloads' section of this page.