The sand dunes are found on the north western side of the Burrows where they separate the Atlantic ocean and the coastal grassland. 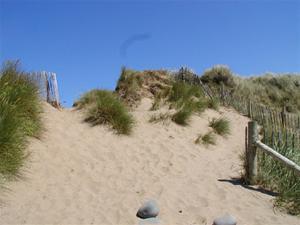 The dunes are formed by wind blown sand. Sand on the beach dries out at low tide and is blown inland where it accumulates at the top of the beach causing dunes to form. The dunes near to the pebble ridge are known as mobile or yellow dunes which move inland  when the wind blows the sand. This is a  harsh and unstable environment which makes it hard for plants to colonise here. Marram grass however thrives where the sand is mobile. It has specially adapted leaves which retain water, is salt tolerant and if it is covered with  sand it will grow upwards faster to reach the light.

Further inland the dunes are described as fixed or permanent dunes. The sand settles here and allows humus to build up which provides a stable environment where different species of plants which again are tolerant to drought and sea spray can colonise. In this area you can discover plants such as the Restharrow, which covers the dunes like a pink carpet contrasting with patches of yellow Birds Foot Trefoil and  dune Pansy. Hounds Tongue can also be found along with Common Centaury, Vipers Bugloss (so called because of its speckled stem which is similar to a snake skin), Sea Stock and Pyramidal Orchids with their musky scent.

The dunes also provide a home for a range of fauna. Woodlice and Ants share the dunes with Common Lizard and Cinnabar Moths. Large holes can be seen where  Badgers have taken up a seaside residence with smaller burrows being made by Rabbits (providing Northam Burrows with its name). Sections of the dunes are fenced for coastal  protection which provides a haven for  ground nesting birds such as Wheatears and Skylarks. The warbling song of the latter can be heard as they hover overhead.