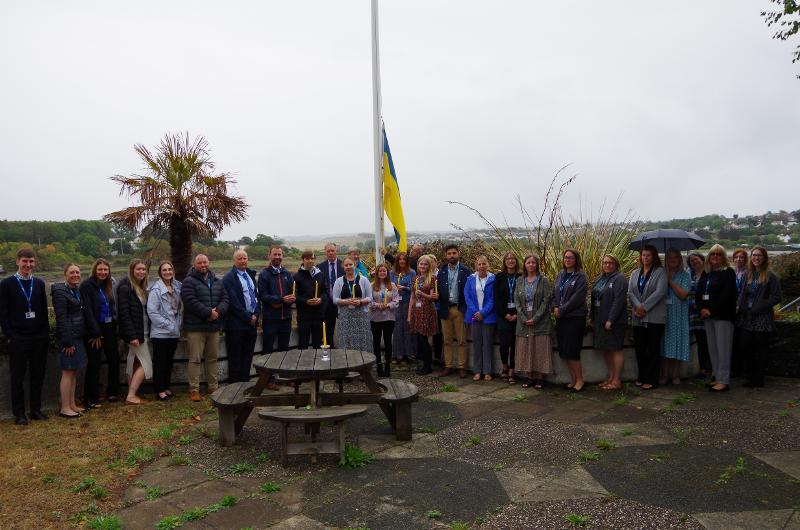 Torridge District Councillors and Staff gathered at Riverbank House on 24th August to mark the day Ukrainian's normally celebrate their Independence Day. It commemorates the day 31 years ago that the country declared independence from Russia in 1991. Ironically in 2022 it also marks exactly six months since the Russians invaded Ukraine in a move widely condemned by the rest of the world.

Councillors and Staff that attended were invited to reflect and remember all those who have lost their lives and continue to suffer as a result of the war. Like other Councils in Devon, Torridge District Council and residents, have opened their doors to support Ukrainian refugees as part of the UK Governments wider response to the crisis. Local charities such as Wings South West and the Pickwell Foundation have also been at the forefront of helping refuges resettle and form links in the communities, while they wait for the outcome of the conflict in their homeland.

Deputy Leader of the Council, Councillor Claire Hodson led the remembrance with the lighting of candles and said:

"We are here today to demonstrate our solidarity with the people of Ukraine and to continue to support them in their battle for their Country and freedom.

We think about those that have given their lives, the injured, the displaced, the families that have been torn apart, and all those living in fear of what tomorrow will bring.

We pray for peace and an end to the hostilities. We have raised the flag of Ukraine to symbolise our belief that freedom is the right of every individual and have faith that right will soon be restored to the people of Ukraine"