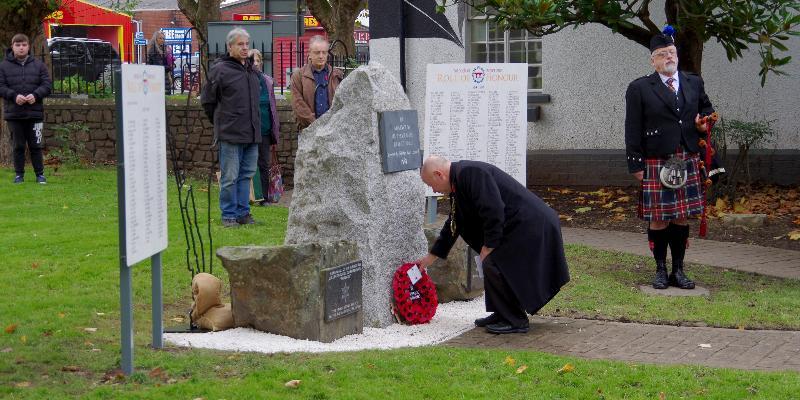 At the eleventh hour on the eleventh day of the eleventh month, Torridge District Council and Bideford Town Council came together at the War Memorial in Victoria Park Bideford to remember the fallen. Reverend Robin Pride conducted the Act of remembrance with contributions from the Chair of Torridge District Council, Councillor Doug Bushby, and Piper Mike Harper from the Bideford Pipe Band. The event was also attended by Tom Hart, General Manager at Harland and Wolff's Appledore Shipyard. The gathering included other Town and District Councillors and members of the public who joined the Councillors in a ceremony culminating with poppy wreaths being laid at the memorial and a two-minute silence.

Armistice Day has been observed across the nation every year since 1919. Traditionally, the nation pauses and reflects on the service and sacrifices Armed Forces personnel have made over the years. 2022 marks the 40th anniversary of the Falklands Conflict, which lasted 74 days, in which 255 British personnel lost their lives. The anniversary was commemorated in June of this year when veterans of the campaign and their families came together for an event at the National Memorial Arboretum in Staffordshire.

"Remembrance allows people of all ages and backgrounds to reflect upon the service and sacrifice of the Armed Forces and to join in the hope for a brighter, more peaceful future.

As a community, it's important that we remember not only those who have fallen but also those who still serve and their families. It is through remembering and honouring the past that we can best stand alongside the Armed Forces community of today."