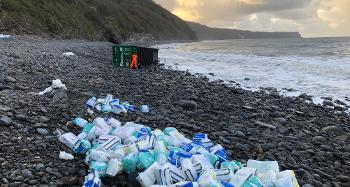 HM Coastguard continues to monitor an incident involving shipping containers adrift in the Bristol Channel which were lost from a container ship on 20th October.  Of the 11 which were initially reported, six were empty and five contained non-hazardous cargoes.  Some may have sunk as not all have been seen during vessel and aircraft searches.

Also actively involved are the Maritime & Coastguard Agency's counter pollution team, Trinity House, the ship's insurers and a number of commercial contractors, including chartered vessels engaged in searching and recovery. Relevant authorities have been informed and are being regularly updated. The MCA's specialist fixed wing aircraft has been conducting overflights of the area, to assist in the tracking of containers still adrift. This morning a vessel managed to secure a tow to one of the containers in difficult weather conditions. Local shipping alerts are being issued by HM Coastguard to advise other vessel traffic in the area and contingency arrangements are under way for container recovery with salvage contractors.

At around 11.30am on 26 October, HM Coastguard had a report that a container was on the shore at Bucks Mills, north Devon.  The authorities including Devon and Cornwall Police have been notified and Bideford Coastguard Rescue Team was sent to the scene to escort the salvage contractors. The contractors started cutting it up the container on 30th October. The shoreline clean-up is ongoing and is almost complete, however some debris was spotted moving with the tides - Torridge District Council and local volunteers have been collected variously from Woolacombe, Saunton, Westward Ho, Green cliff and Abbotsham beaches.

A container was towed to Lynmouth on 27th October. The remaining debris was cleared from the beach on 28th October.

Another container was located on 28th October on the beach at Aberthaw Power Station, near Breaksea Point. The container was removed on 29th October.

An empty container was washed up at Monknash near Southerndown on 28th October. Due to its location, access for removal may have to be by sea, but the weather forecast may not enable this for some days, so other options are being considered.

Reports were received on 29th October of some debris ashore in the Rest Bay areas. These are currently being investigated.

On 30th October a Trinity House vessel is standing by a partially submerged container which may beach overnight.

Janet Williams, Environmental Health & Community Safety Manager, Torridge District Council said "The Council is committed to protecting our beautiful coastline and we immediately instigated our emergency response procedures - the Public should be assured that this matter is in hand. There may be local disruption to access and parking at Bucks Mill while the clean-up works are being carried out, but access to the SW coastal path will be maintained. We remain in contact with the MCA regarding any further groundings in our district and we really appreciate the public's understanding in this matter."

Members of public are urged to keep well clear of containers washed up ashore for their own safety and should be aware that contractors are carrying out work at the locations noted above.

For members of the public wishing to report a sighting, please contact the nearest Coastguard Operations Centre: